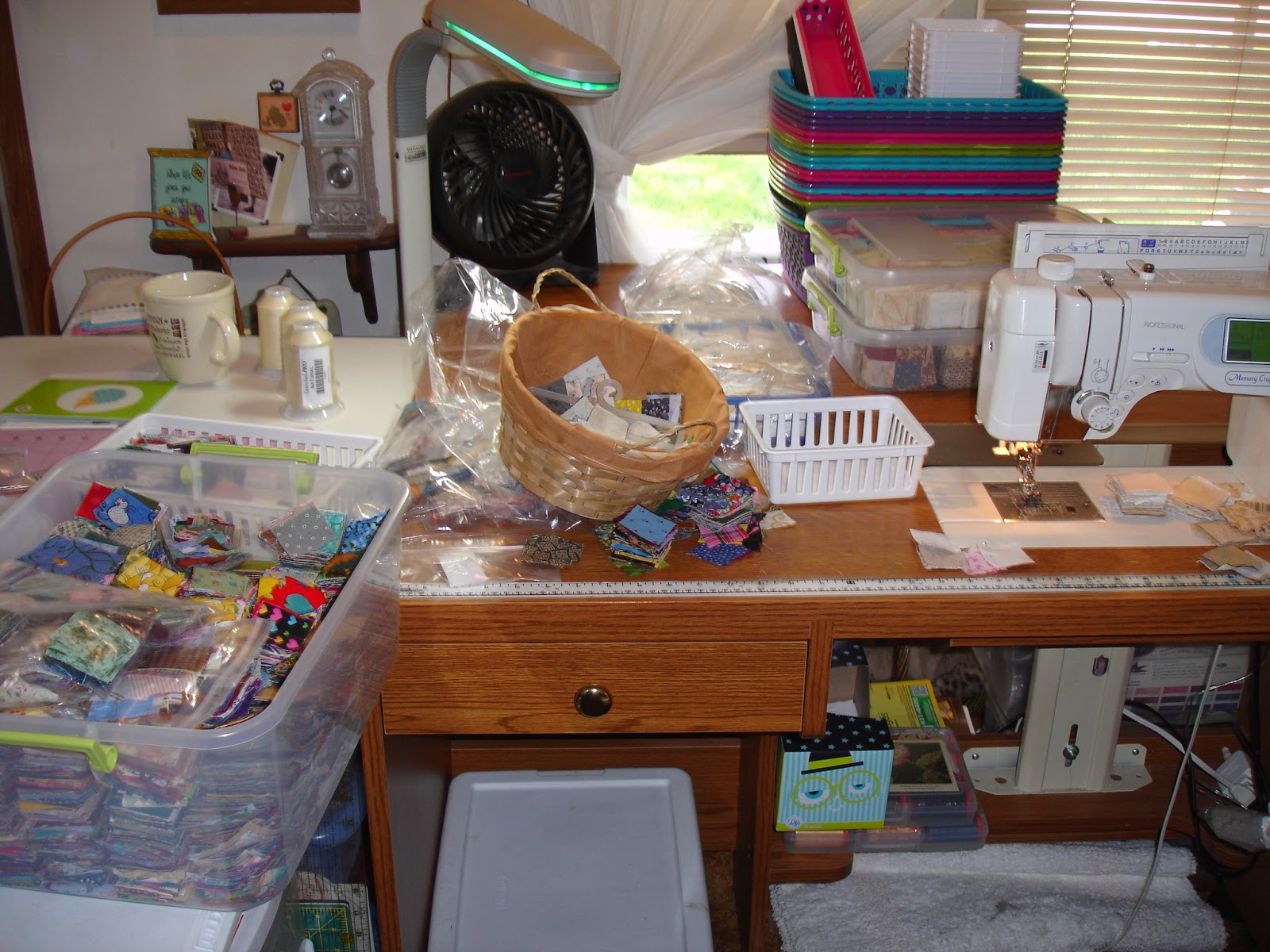 I have been using my 1 1/2" squares as Leaders and Enders all this past week.
And loving how many I was making. I pieced a top for my second daughter's birthday and two copies for Project Linus. The Leaders and Enders then became a major sewing exercise that required no brain work. And a few more days of blissful sewing happened.

There are several quilt blocks that use these precious squares. With the Idaho Square Dance as one goal block, I have a small white container now full of the 3- patch units. And an entire larger plastic container full of 4-patches. Then a smaller container with some Square in a Square finished blocks. And another container with 4-patches of only Civil War fabrics. 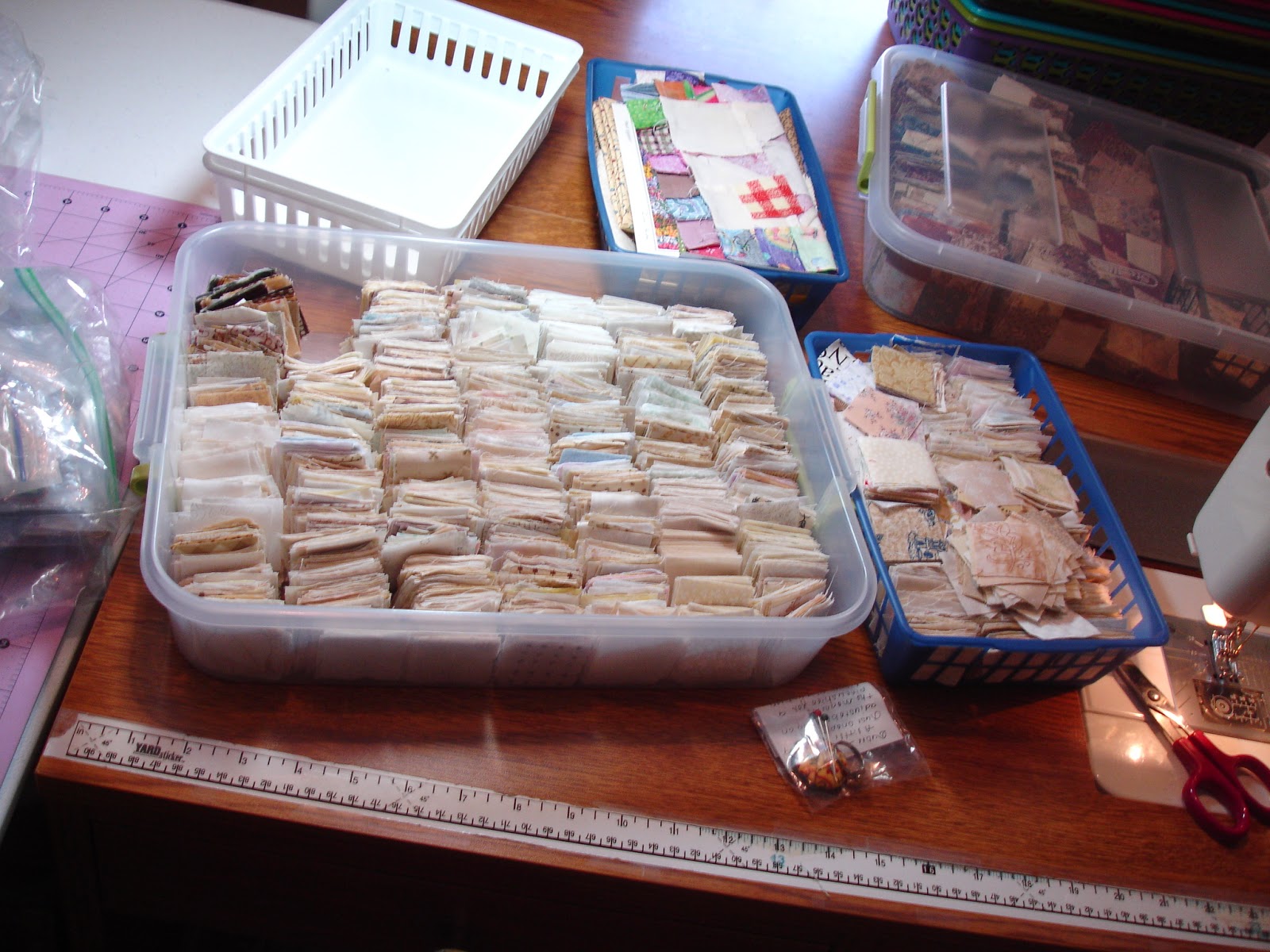 And yes I have all my neutral squares pretty neatly stored and easy to grab for sewing. When I want a lighter square I can grab a pinch full  of lighter squares. I am very happy with being organised. But then today something happened. 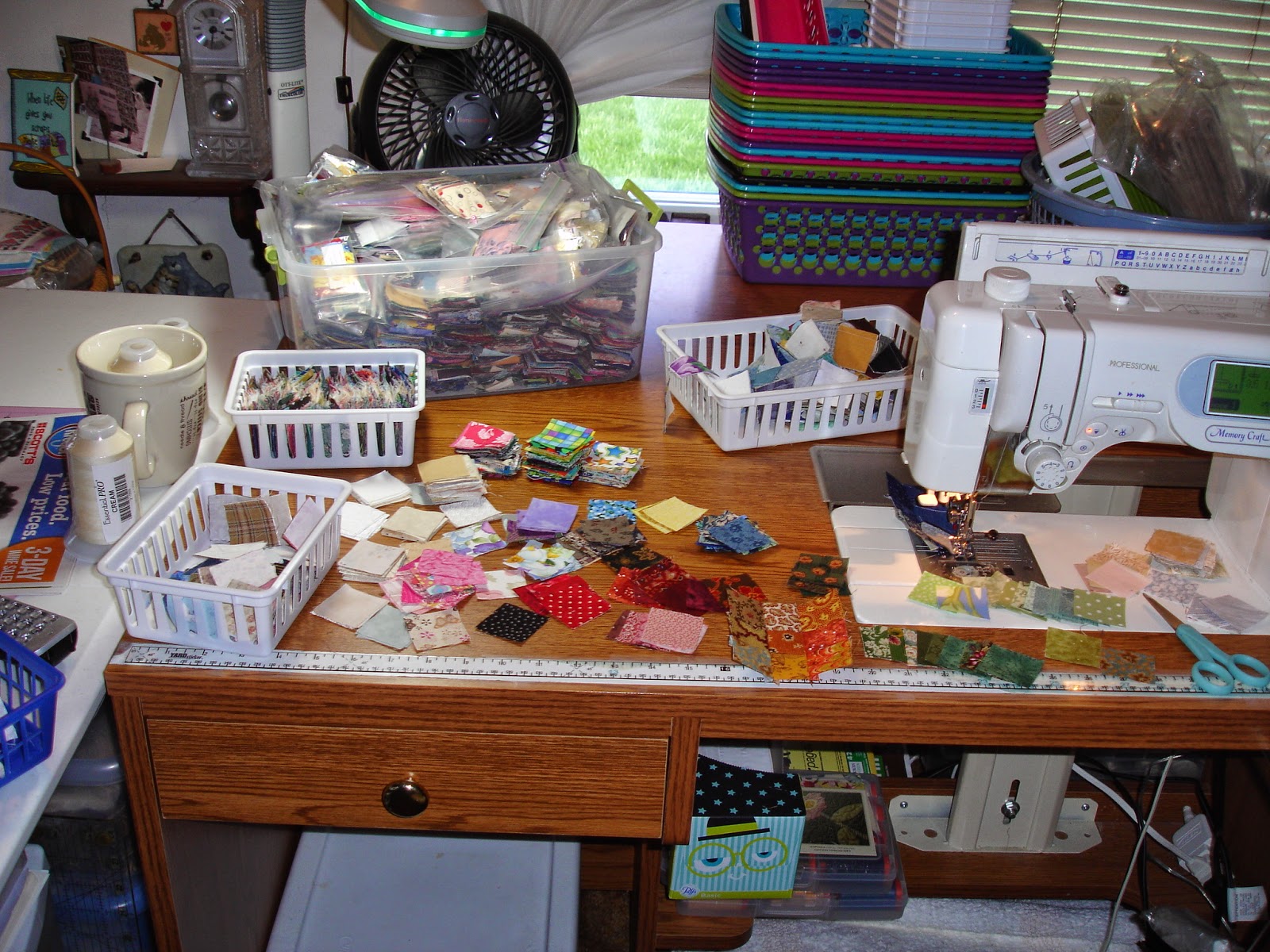 As I was pulling UNSORTED squares from their large storage container (in the back on the left side) my hands started placing them by color. I knew what was happening but was unable to stop. 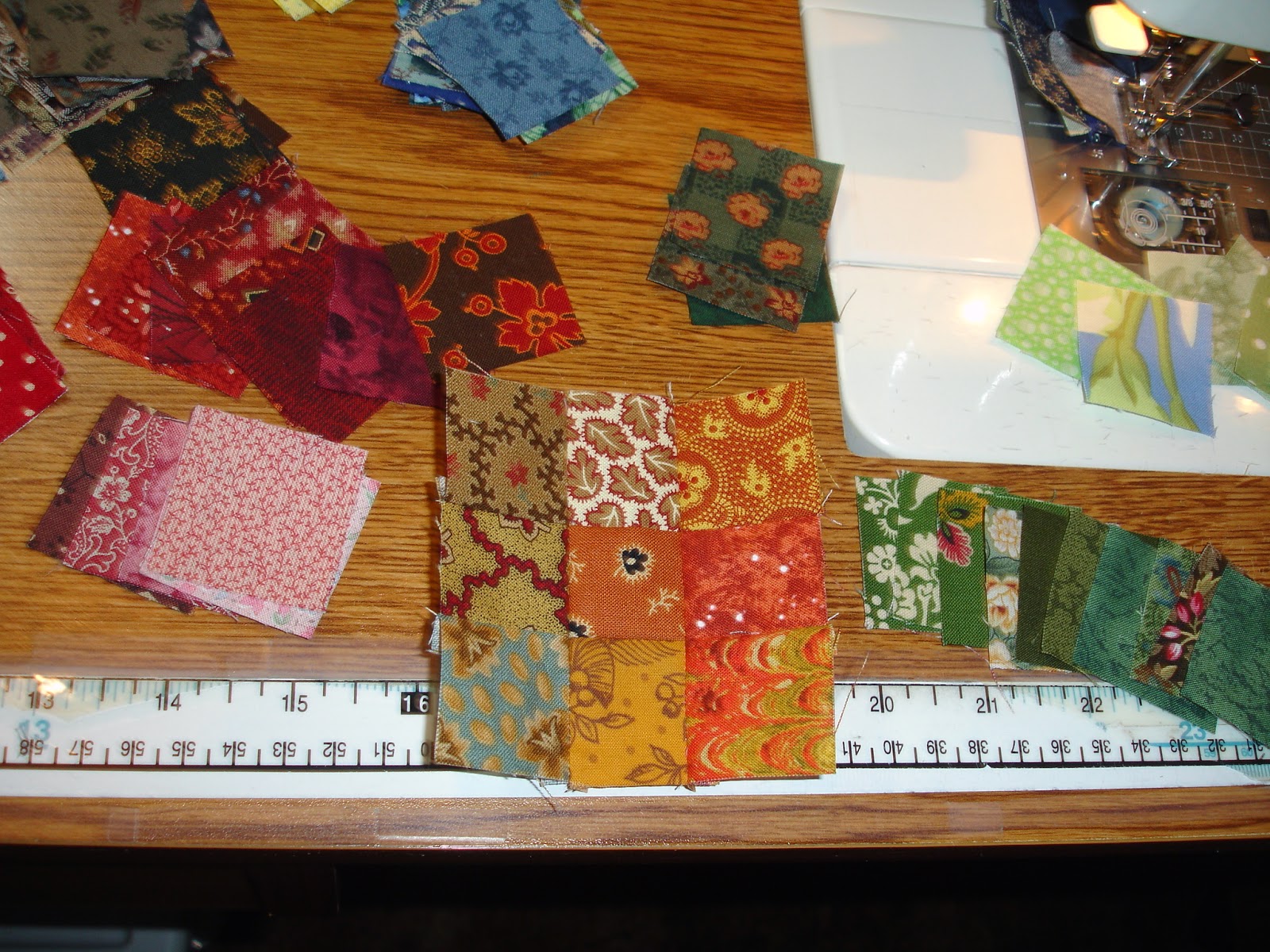 To ease my urges I simply made two 9-patch blocks. I even turned off my machine and told my hubby I was going to take a nap. 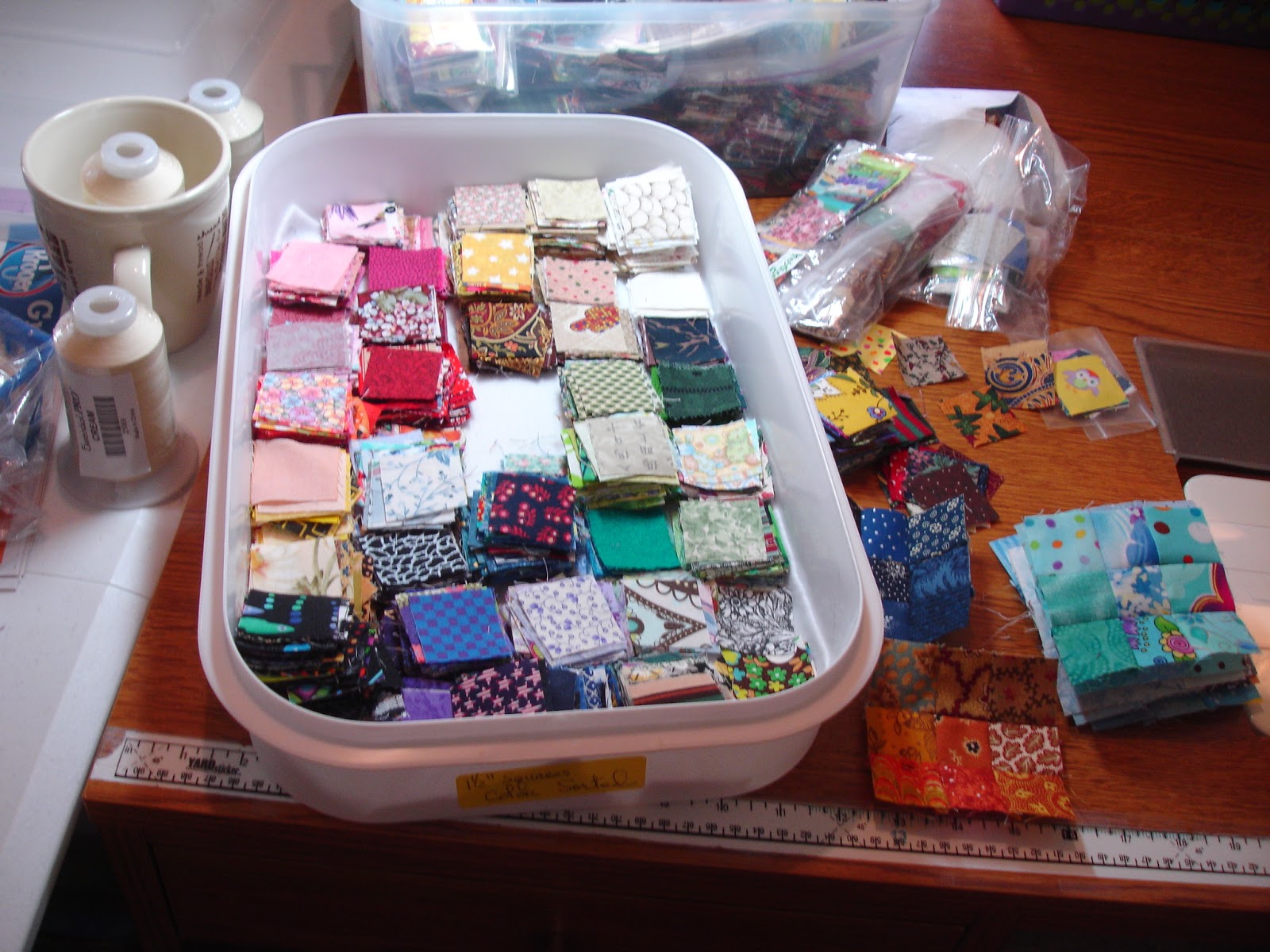 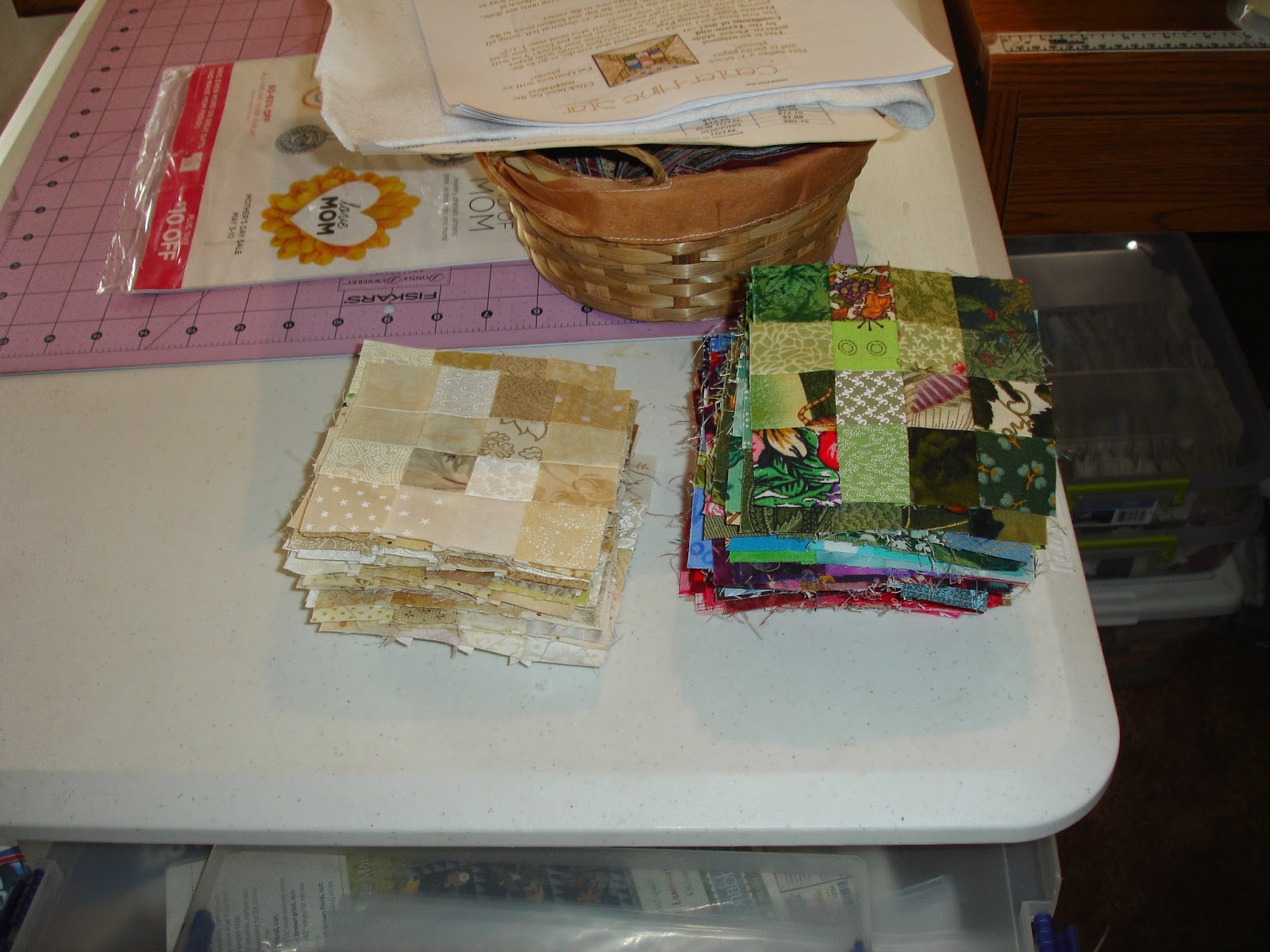 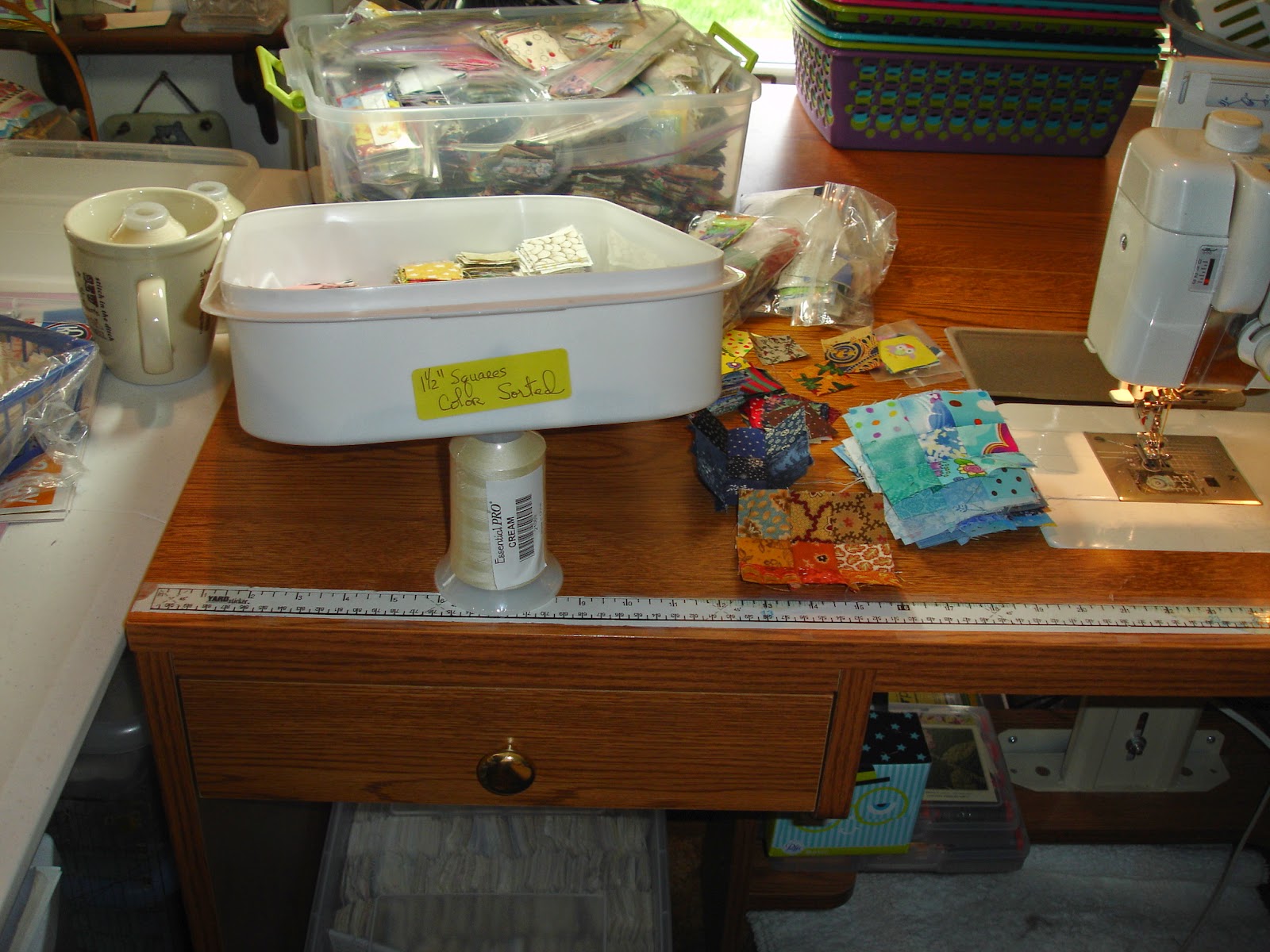 I then proceeded to make 13 more 9-patch blocks with controlled color. My cake container with the patches sorted by color is nearly empty. I wanted no repeats of fabric in each block. This means I need to color sort that large container.
ARRRGGG!!!!! 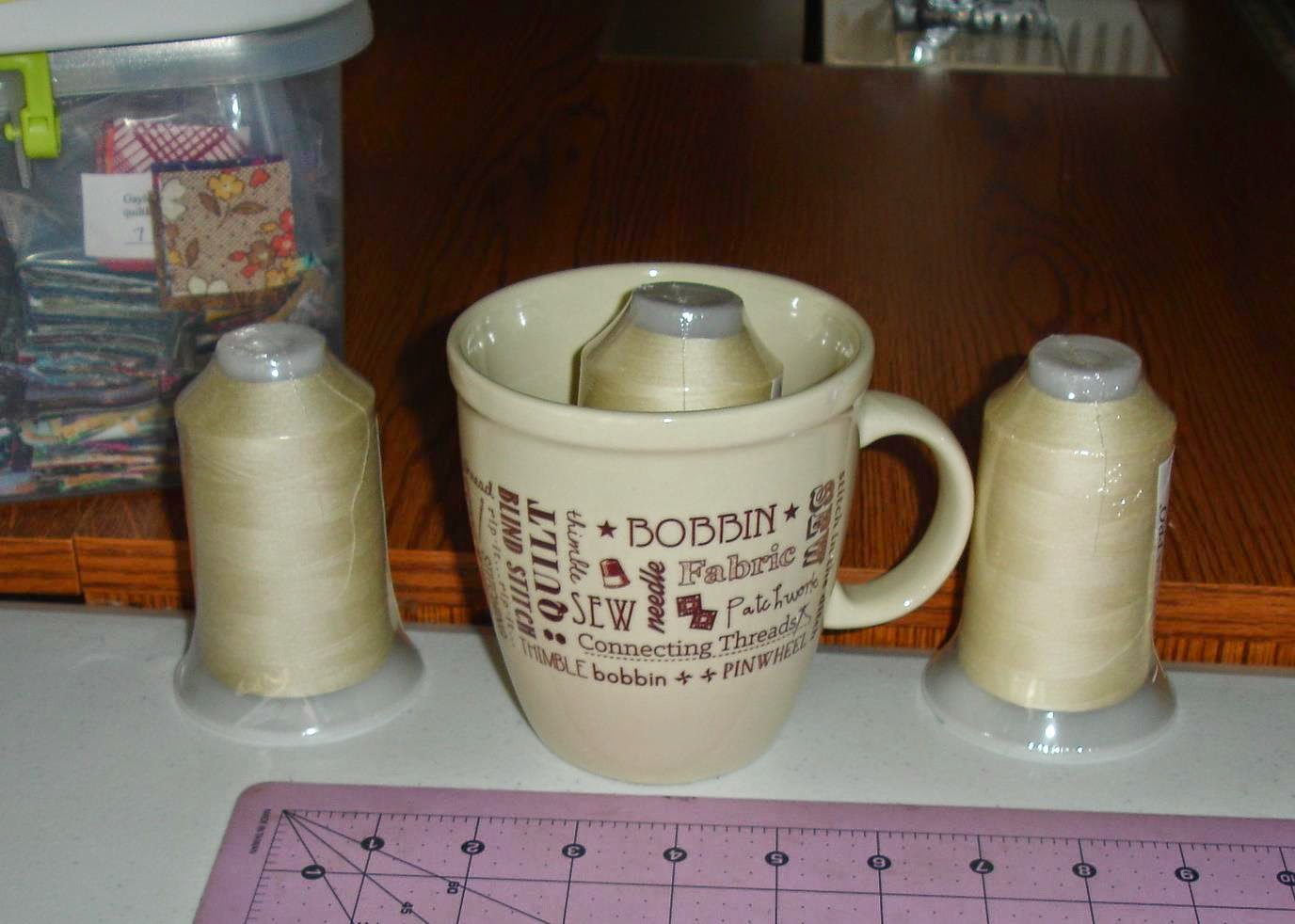 On a lighter note I have a new tea cup and three cones of 70 weight thread.
XOXOXOXO Subee

Here they are. All counted out and sorted through. The cats are waiting to ambush my plastic baskets. I have to keep shooing them away. 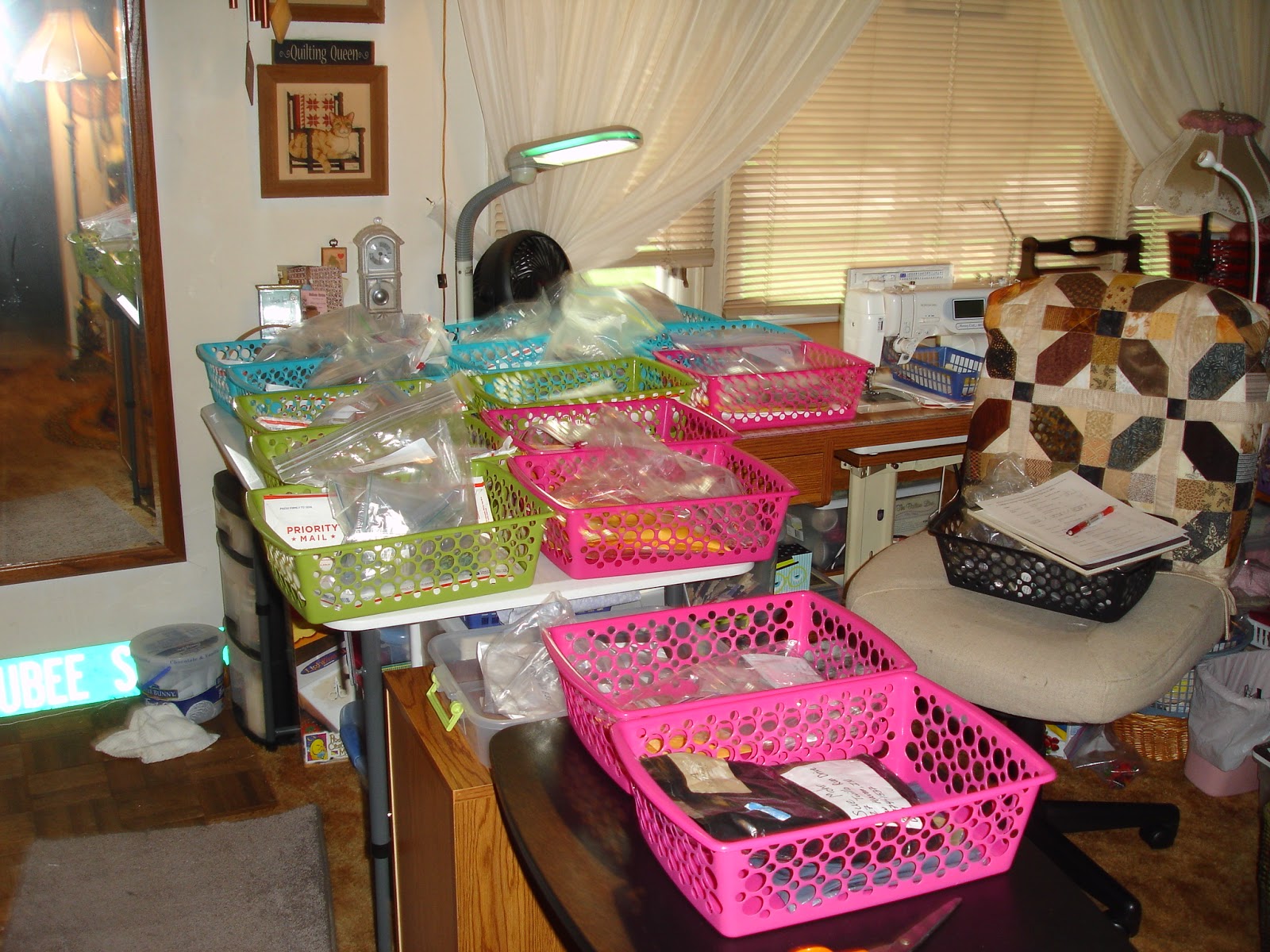 But there is a small issue with one of the swappers. She sent 50 unique fabrics in one set of 25 squares. The others all sent 25 fabrics in 25 sets. If they wanted to swap 50 fabrics they sent in another unique set. 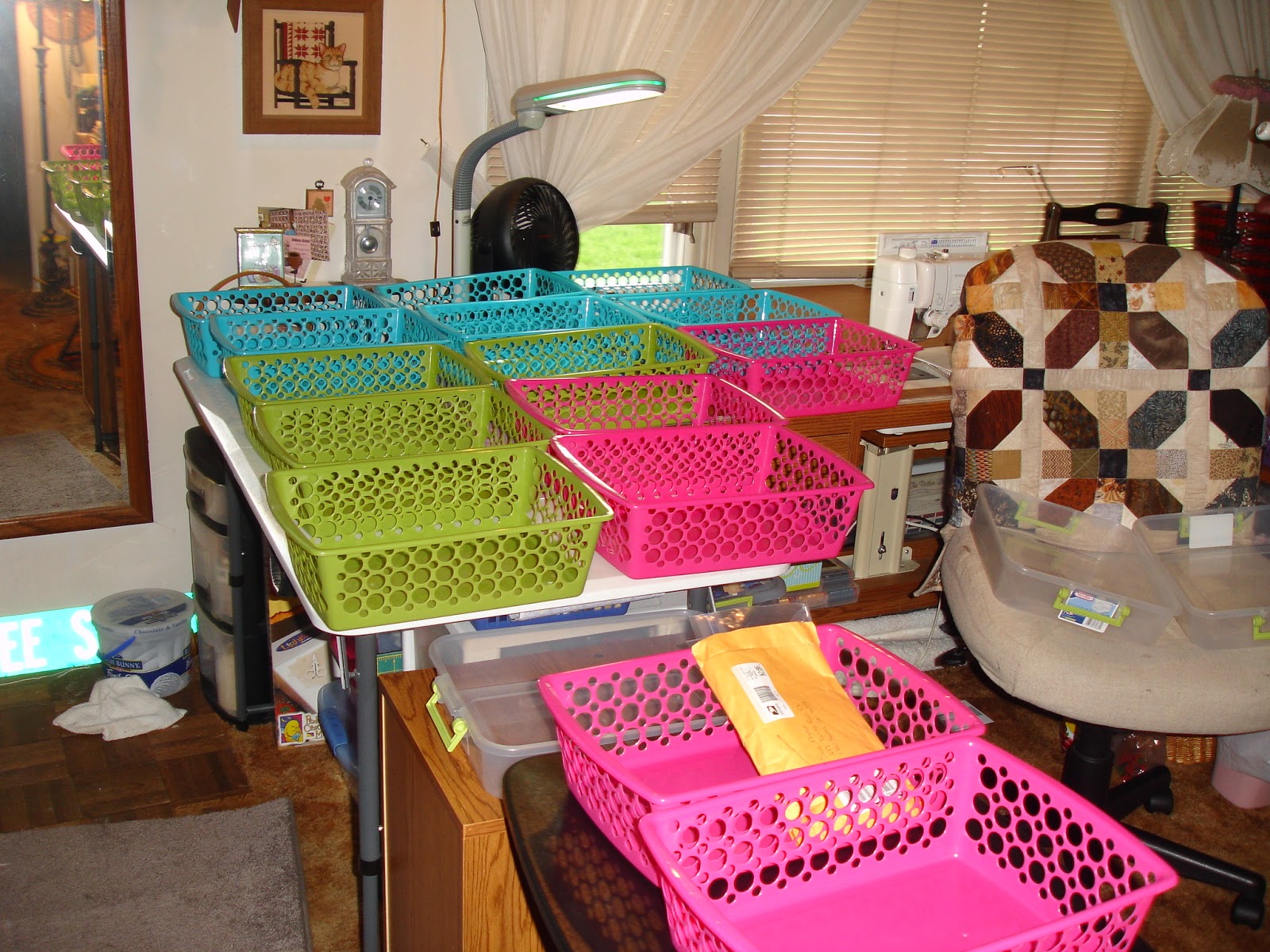 I can get this swap done okay but to all the swappers it will seem as if you are a package short!!! Please understand that we used to swap 50 fabrics in one set. It is not her fault.
XOXOXOX Subee
Posted by SubeeSews at 11:55 AM 2 comments:

Marshall Dry Goods is the best!!!

What can I say? I am a fabric obsessed collector. But I do use my collections.
My Granddaughters keep making more babies and the gift list gets longer and longer each year. When I first saw the ad from Marshall Dry Goods on Facebook I thought it was too good to be true. Almost bought some fabric and then changed my mind.
A few weeks passed and then I was just surfing through the internet and happened on their retail site. I found a pattern that I LOVED. Had to have it!

It is called Petal Power. A very rich saturated spinning design that is as beautiful as Jinny Beyer's fabrics. It was too late. I was hooked. 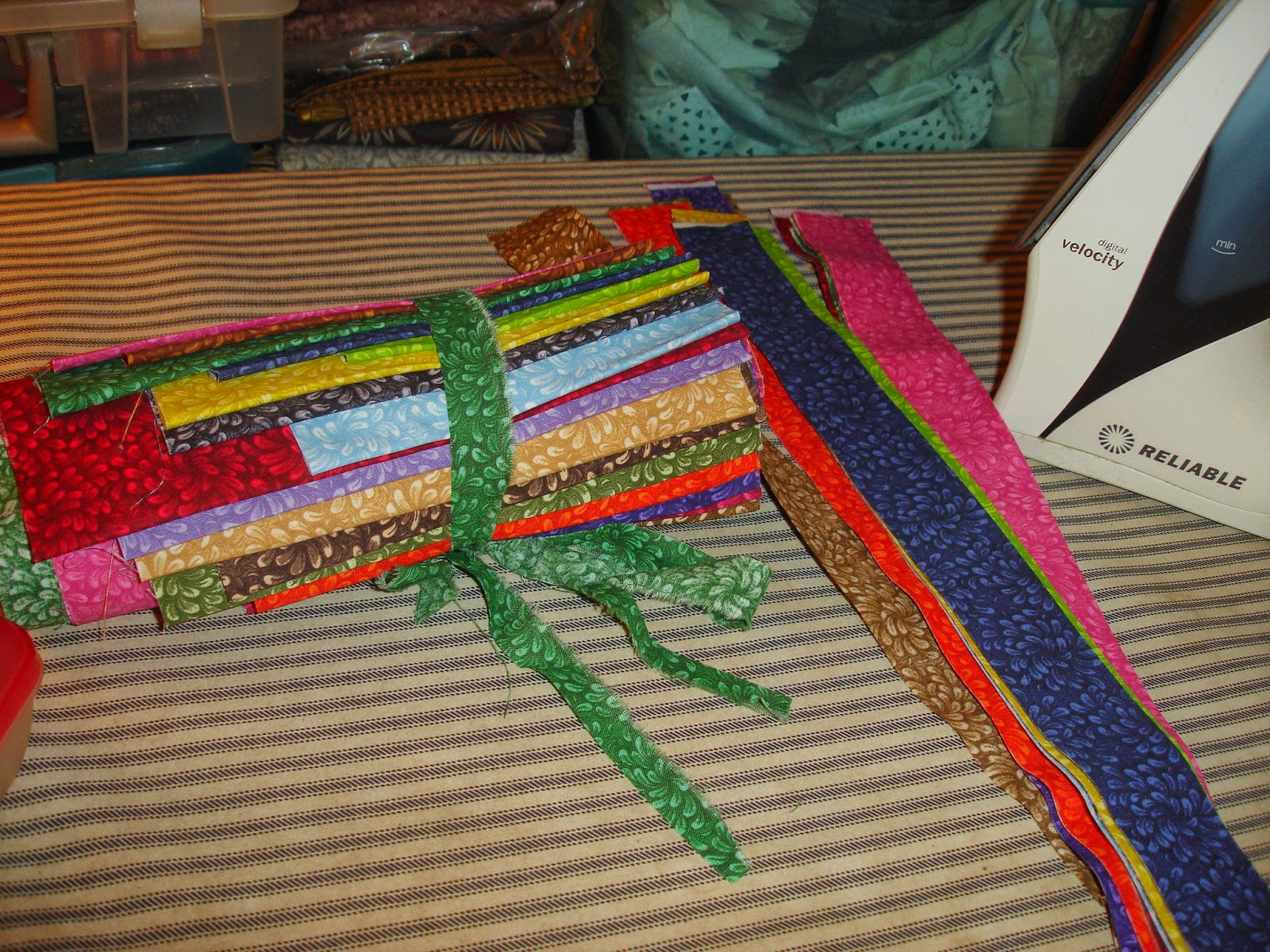 As I opened the box that my Dear Hubby carried in asking if I had ordered a set of encyclopedias, I found these beautiful fabrics.
Matt, the man I talked to when I placed my order, could not have been more helpful and friendly. And I really liked his soothing Arkansas accent.  He said quilters on Facebook were buying his fabrics to resell. I assured him that I planned on using mine!!! HA!
And I did. I unrolled the flatfolds and tore a 12" strip off each fabric. And as I opened and saw each color, that became my favorite one for a moment. 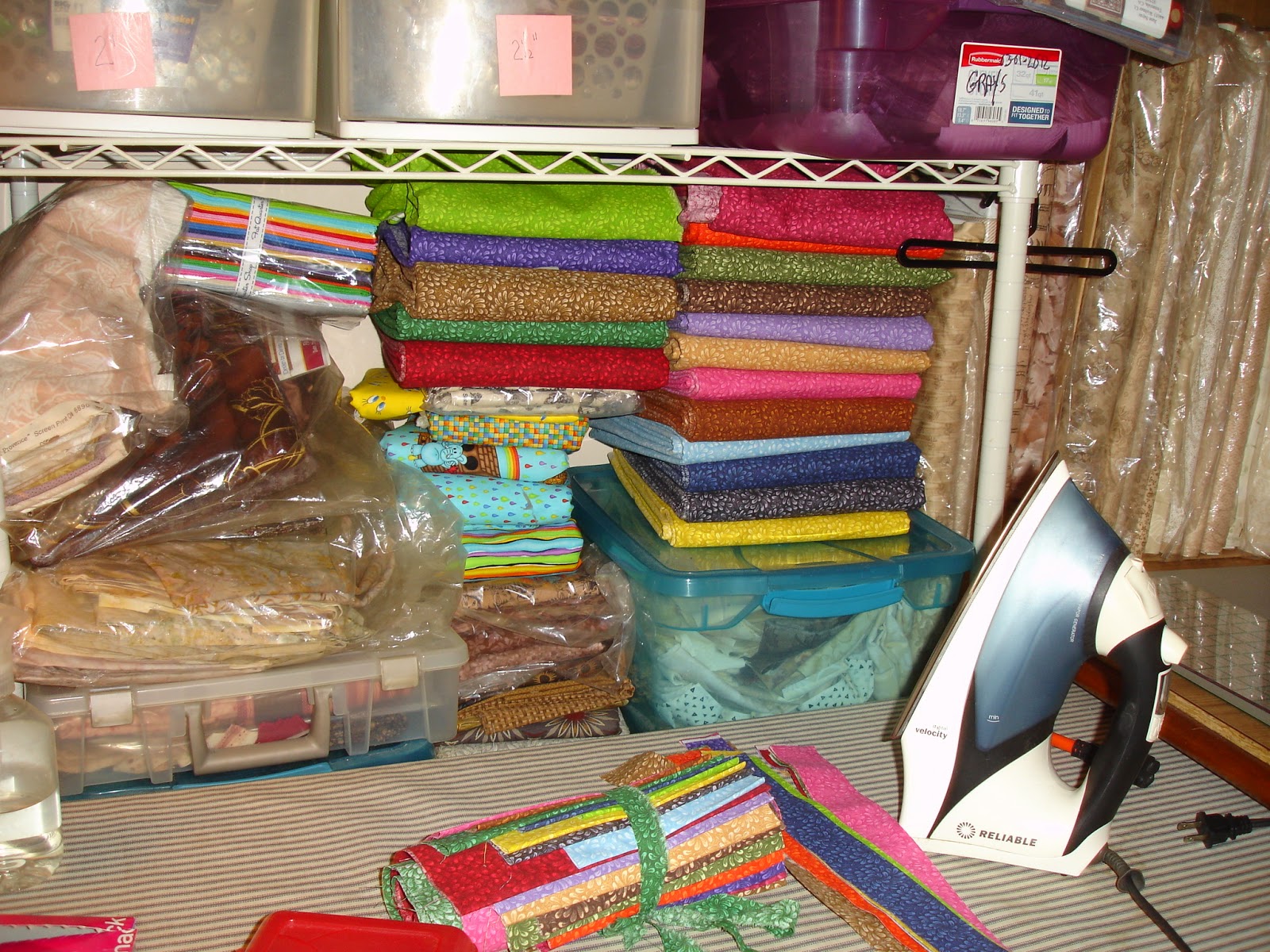 I spent a great evening pressing and cutting 1 1/2" strips from each fabric. And as I was searching for an empty container under the cutting table I came across these 1 1/2" strips all in the brown family. I swear this one bag weighs 2 pounds. 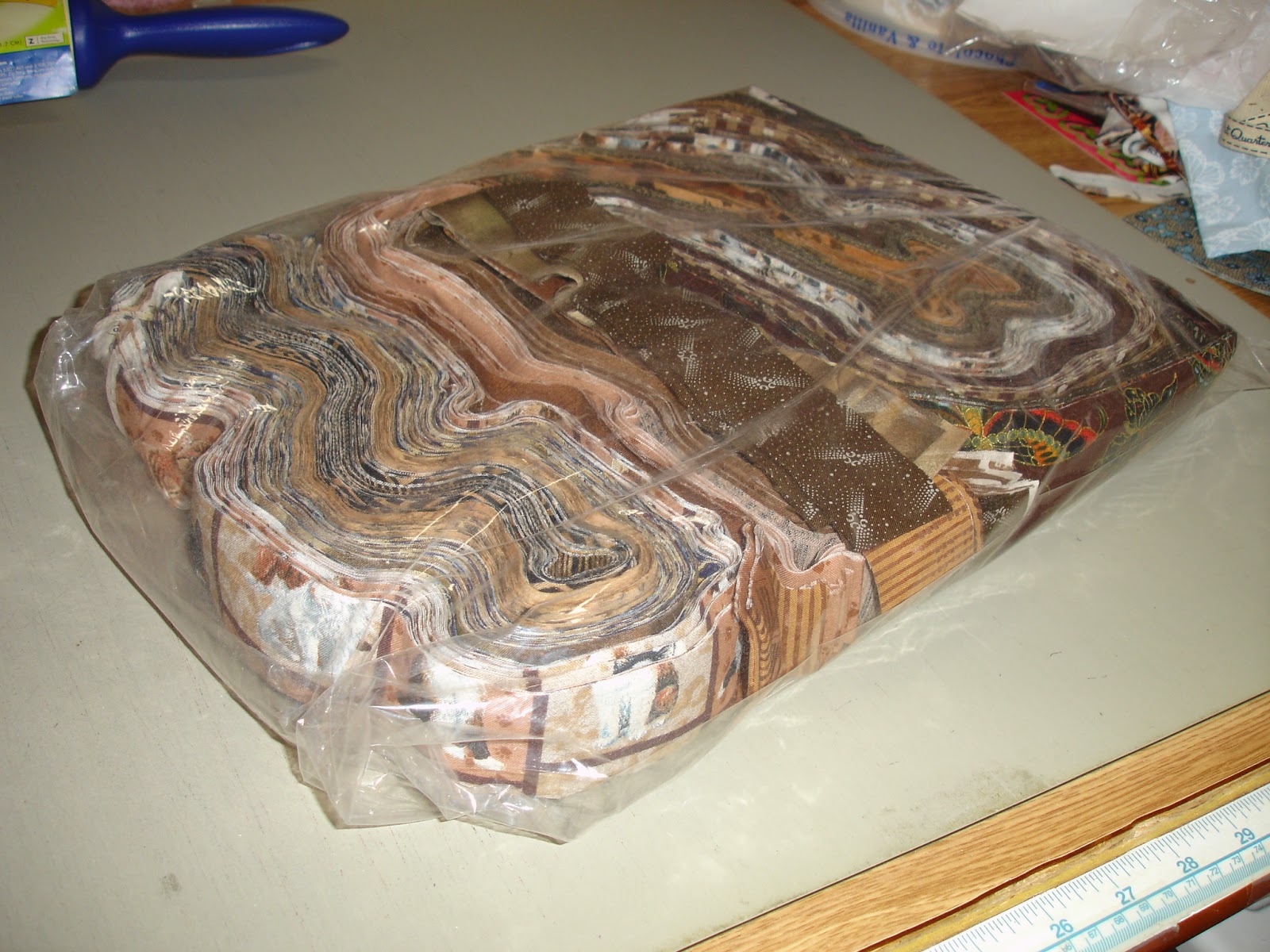 XOXOXO Subee
who is baking her hubby a chocolate fudge cake
Posted by SubeeSews at 2:13 PM 5 comments:

I did not get much done at the retreat as I was having issues with my place being set up awkward. I had lots of room but seemed unable to get comfortable. Finally I put the main project away to be finished at home and just made little 4-patches from my Civil War fabrics. 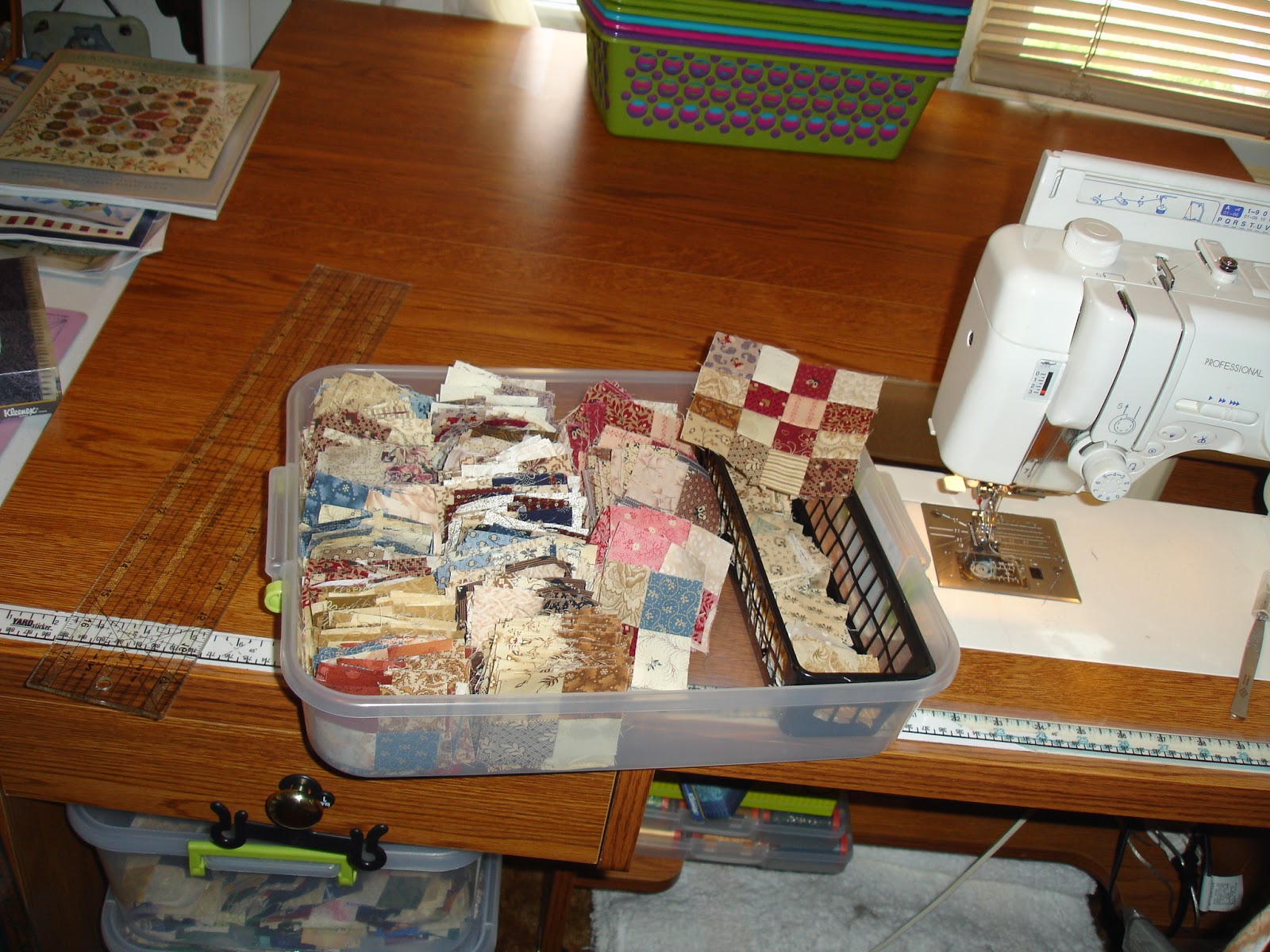 Then finished them up here at home as Leaders and Enders. Today I made this pattern called Falling Leaves. This is the second one I have made. The first one was given to my doctor when he retired last year. Somehow this one seems lighter in value even though I used all the same fabrics. 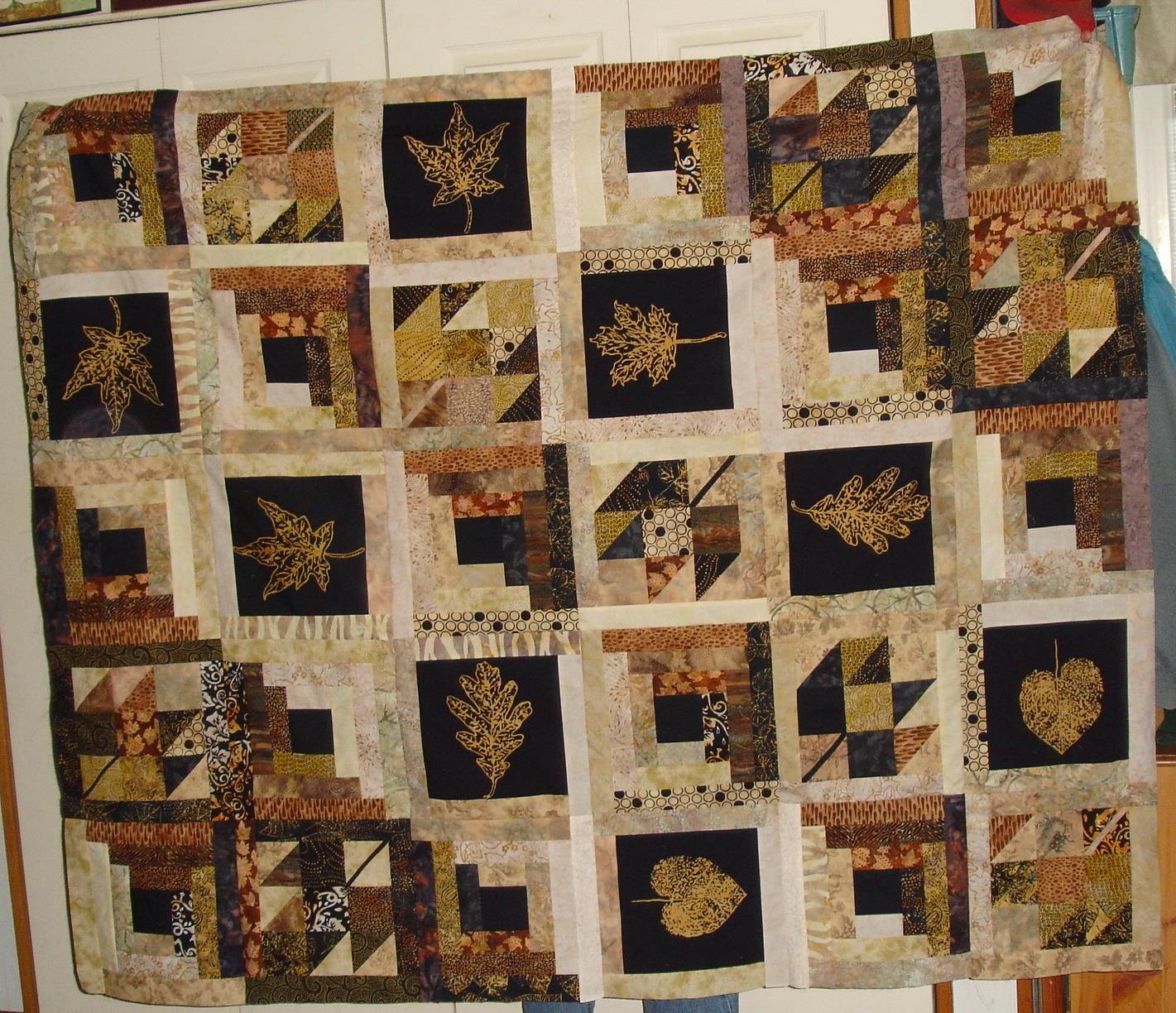 I am so glad I have a tall husband.
XOXOXOX Subee
Posted by SubeeSews at 4:49 PM 1 comment: