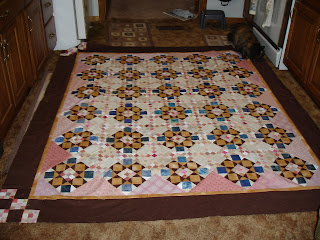 Here it is in all it's glory. 80" x 92" too big for my kitchen floor. And way too big for my tiny design wall. There is no one here to hold it up for me except the kitties. And they are busy with the birds at the front window. 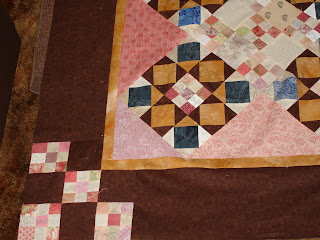 I went with the extra 9-patches on the side borders. I love how they turn the corner into a curve as the blocks do! 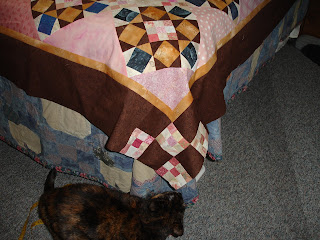 Corner from my bed. Can you see Baby checking it out. The quilt under the double Delight is the first quilt I ever made of any size. I did not know what I was doing. But it is the only quilt in the house that fits our bed. We like a lot of overhang. It was also the reason I started to buy fabric in larger hunks. I ran out three times while making that old cat quilt. It turned me into a fabricholic big time.
This is not an excuse...this is a fact.

When to NOT clean the sewing/fabric room

Last Tuesday hubby and I discovered that the furnace was running but not putting out heat. I had been cold the day before but really did not think it was the furnace not working. After calling a repair man and getting a "first thing in the morning" appointment that turned out to be closer to noon, we soon had heat after lightening our wallets.
The problem is that access to the furnace is through the ceiling of my fabric storage and cutting room. And I needed to move vast amounts of stacked plastic bins and stacks of folded material, not to mention my super big heavy ironing board (24"X 66"). While waiting for the repairman to arrive I started sorting and moving things around while watching the Inauguration . I felt great to be straightening up this room and watching history in the making.
I dusted and swept...you know a spring clean sort of. The man came and left and I put the room back into a semblance of order. I still had all the trimming to do on my Double Delight blocks. It took me the rest of the week off and on to get them all trimmed.
So today was assembly day...but I could not find my stack of pinks for the setting triangles.
ARGGGGGGGGGGGGGGGGGGGGGGGGGGGG!!!!!!!!!!!!!!!!!!!!!!!!!!!!!!!!!!!!!
I finally found them in another room where my quilt machine is setup. I must have known I would need them and had planned accordingly. But then forgot! So anyway: 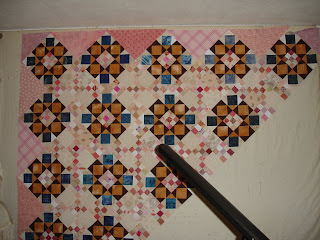 I have both halves assembled. Hubby was so nice and went to get us Chinese food so I did not have to stop and cook today. I think this pattern is my most favorite of Bonnie's. But then I love pink. 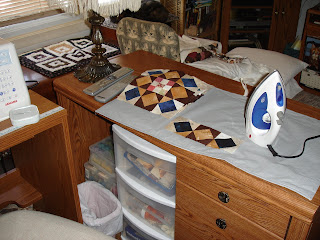 And I really like my new desk arrangement. The little craft iron is right next to me. All I have to do is spin in my chair and I can press my seams! 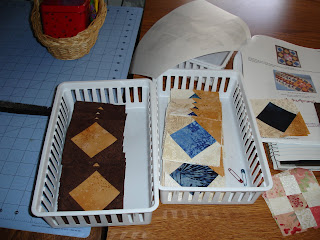 I used all blue batiks for the indigos that Bonnie used in her Double Delight. Also my pinks were not double pinks...just pinks. My cheddar was a fossil fern gold color. 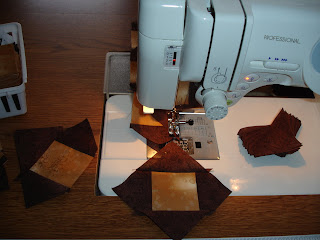 I have been sewing since 7:00 this morning. I still need to made 40 more then I am done with these. They are so much fun. I cut enough to make 30 extra. I may go ahead and sew them up to play with later. 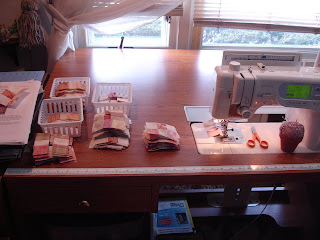 I have this step done. I have 287 9patches done! More than twice what I need. I am a maniac. 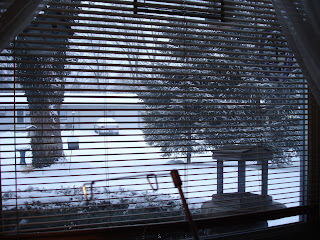 This was my view from my sewing machine during some of the snow and -19 temps we suffered for several days. My legs were cold so I stuffed an old quilt on the floor under the machine between me and the window. There are advantages and disadvantages to sewing in front of a big window. 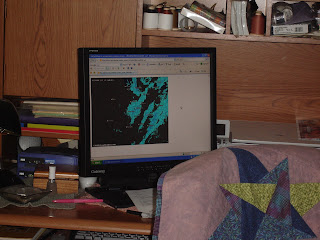 Just grabbed a quick shot of the radar. Hubby has now informed me I am NOT to tell him what snow is coming if he calls home. He gets so sick of plowing snow. Like housework it is never done. 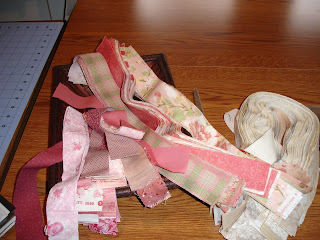 Here are a few of the strips before starting to sew. As usual I made way too many units. I have this fear of running short! 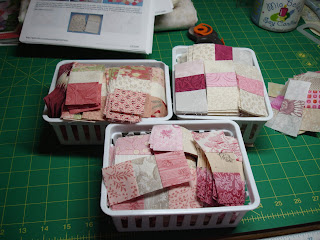 I have enough of the pink/light/pink to make 273 blocks. I also have enough of the light/pink/light to make 340 blocks. I hope this abundance will give me a lot of variety as I assemble these.
See the little stack of crumbs to the right? I will save those to add to my crumb drawer.
I started the Double Delight part #3 with these 9-patches instead of at clue#1. With a blizzard heading our way I hope to have the quilt completed this week! Come on snow!!!!!!!!!! 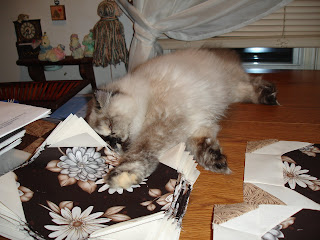 MaggieMay is now 7 months old and feeling hers "oats". Every block I pulled off my stack had to be disengaged from her paw. One little tug and a small bite and she let me have the next block. This lasted through the entire assembly process. Check out how big her paws are!!!!!! 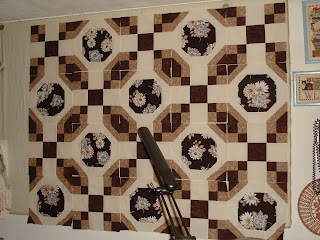 I have almost all the blocks done and could not wait to throw some onto the design wall. Of course the wall is not big enough to handle the king size quilt I am making. But I plan on quilting it in sections anyway so this gives me a good idea of how it will look. I am very proud of my sewing and so very grateful to Ann Smith for designing this beauty. 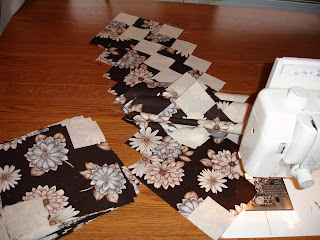 Here I am at step #7. I decided to double sew all those corners. And ended up with: 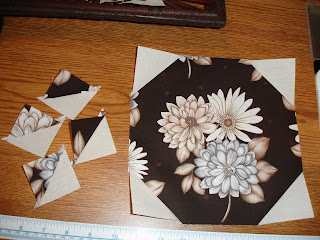 160 little half square triangles. They will finish at 1 1/2". I love this process of no waste!

Posted by SubeeSews at 1:18 PM No comments: