Hoping at least one of those links will work.

Bonnie's posting today was just what I needed. I finished up all my spool blocks. They are all in groups of ten and I ended with an even ten...serendipity!!! I now have 810 spool blocks. 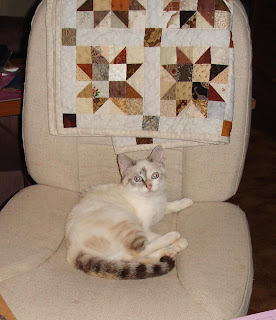 Our newest kitty member (#5)  has won over our hearts!!! Meet Lucky Lucy.

DH found her in the yard 3 weeks ago. Totally feral...untouchable even after a week of DH sitting outside with her, sweet talking and feeding her food. She bit and scratched him really bad one time. But we did not give up on her. There were (and still are) places on her back where all the fur is gone and is not growing back in. It almost looks as if a large jaw had hold of her. We have foxes and coyotes that visit from the river. Who knows what happened to her. It could also have been human meanness...I cannot fathom that fact. So I won't think about it.

On week two there was a large thunderstorm...our garage door was open and she simply walked in. So DH slowly shut that door and blocked the kitty door from the house. No drama...no nervous behavior. We continued to go out for another week and speak to her and give her food and water. She slowly began to trust us. Allowed touching then scratching and then cuddling ON THE GROUND ONLY.

Then we opened the house door (shut the "air" off) and waited for her to come into the house. She did...she is using the litterbox. She is using the cat scratch tree. No fleas. No ear mites...has turned into a real cuddle bug. She is still not happy being picked up. But we are working on her. She lets us press out her toenails...we have yet to try nail trimming. Small steps with such big rewards.

She has claimed my sewing chair as hers. She looks so beautiful on it. I swear she matches that quilt on the back. 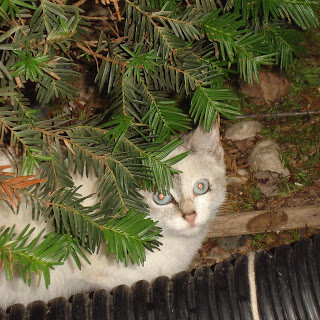 This is Lucky Lucy under her favorite outside bush...so scared. 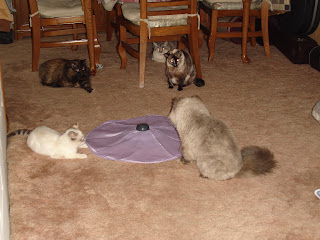 And I bought a new toy and all five cats love it. There has been minimal hissing and no cat fights at all. It is as if she was meant to be here. She shows no desire to go outside. I figure she is about 12 weeks old. When we get her a bit calmer we will take her to the vet...oh boy I hope she doesn't hold a grudge. 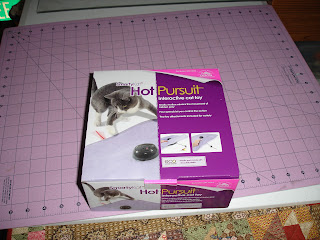 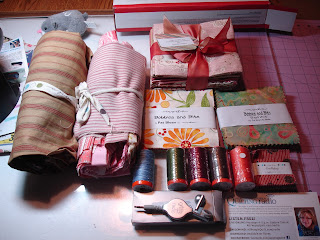 I received this gift package from the famous Pat Sloan. All my favorite colors and Aurifil thread. Thanks Pat Sloan...you rock! Quilters are so generous. And her basket made it safe and sound to Virginia. Read her post here:
http://blog.patsloan.com/2013/07/pat-sloan-do-you-hoard-fabric-.html#comments