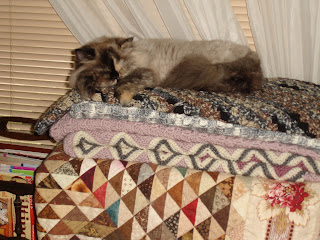 Here is our Maggie Mae sleeping away. She has been there all day despite all the confusion, vacuum cleaner and Hubby and I trying to get our new TV boxes and internet modem up and running. This sleeping spot was created by me this morning. You would think that it has been there forever.

Comcast forced us to get newer TV boxes despite the fact that our old ones were working well. The darn remote controls did not work. I had to have two at all times. One would turn the TV on and mute and the other would allow channel changes and volume control (sometimes).

The new ones arrived a few days ago and Hubby did his box install first. Then we lost internet for a few hours. But it came back on. He was having a good time showing me all the new features on the remote. Fast forward to this morning and he decided to set my TV box up. Not an easy task with all my junk in front of the TV cabinet. I was able to vacuum in places that had not seen one for years. HA!

BUT!!! The internet would not work at all on his computer. I go days without turning my 'puter on so I did not worry. Thought he would get it working. The poor guy was on the phone with Comcast for three hours. First they said there was an outage. But another phone call and they said there was no outage. Plugging and unplugging. Getting his laptop out and seeing if it was out equipment.  Finally the lady said we needed a more modern modem. Hubby went and bought one. Set it up and spent another hour or so on the phone with Comcast. Finally we had to make an appointment for their help. NEXT FRIDAY! A week with no internet. Now I was getting freaked out. Hubby took the laptop and found a hotspot and did his internet thing away from home. He came home and again we tried with my computer. No go. So I shut mine off. He went to his and tried to load internet and it WORKED!!! I turned mine back on and it WORKS! Guess we needed to hold our mouths right.
PHEW!!!!
XOXOXXO
Subee
Posted by SubeeSews at 8:52 PM

Feathers in my Nest said...

I certainly sympathize...My Mr. recently moved my sewing room to the basement..I was concerned about if I was close enough to the router & modem to connect my computer to the internet, well, no go..My son is the tech guy in the house. he connected his computer fine. but could not connect mine..worked at it for hours....Time to get a stronger router, boy did that make a difference..I'm back up and running!
Debra in Ma.

Hah - I "found" you again - missed listing you on my readers, then who knows what happened - so I'm reading your August posting and apparently now YOU are having issues with all connections!!! Can't win some days. I have you on my page blog list and you should NOT be missed again when you get back to posting. I have always LOVED your quilts, your OCD and your critter chit-chat!

Subee, hope everything is ok at your house. I very much miss hearing about your family, quilting projects and cats!!


* ONLY HERE YOU CAN FEEL CONTINUOUS VICTORY *